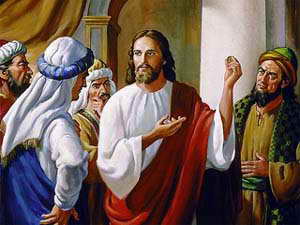 Then he warned them not to tell anyone about him. He began to teach them that the Son of Man must suffer greatly and be rejected by the elders, the chief priests, and the scribes, and be killed and rise after three days. He spoke this openly. Then Peter took him aside and began to rebuke him. At this he turned around and, looking at his disciples, rebuked Peter and said, “Get behind me, Satan. You are thinking not as God does, but as human beings do.” He summoned the crowd with his disciples and said to them, “Whoever wishes to come after me must deny himself, take up his cross, and follow me. For whoever wishes to save his life will lose it, but whoever loses his life for my sake and that of the Gospel will save it.”